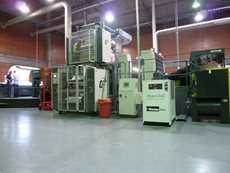 Gonçalves S/A Ind. Gráfica, one of the leading packaging printers in Brazil, invested in the latest Compact Foiler to create special effects on their products.

They are moving to a new facility in São Paulo which is three times the size of their current operation as they continue to expand in South America.

The Compact Foiler was installed on a new 700 press from Man Roland for offline finishing. In the future they can add docking stations to create these effects on their other presses.

The CF1000 can be used for both Cold Foiling and Cast and Cure at high speeds. The CF1000 module controls the tension very accurately for multiple runs of the foil to maximise yield. Several of our customers run cast and cure film many more times than the film suppliers guarantee reducing costs dramatically.

The portable units are loaded at floor level to eliminate shaft and reel handling . Cold foil metallic dust particles are contained away from the press preventing print unit contamination and reducing clean up times to a minimum. High running speeds, four foil saving systems, floor loading, and flexibility of multiple locations make the Compact Foiler a true leader in its class!