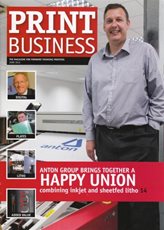 Posters showing the impact that can be achieved with inline cold foiling were disappearing within minutes of being laid out on the Compact Foilers stand during Drupa.

“It was crazy,” says Tim Self, director of the Taunton business. The images of sports cars were nicely printed, but the addition of foiling had stepped up the quality to highly desirable levels.

The idea of adding foil inline on a sheetfed press has taken off and the British manufacturer is well placed to take advantage. It has what is the most versatile retrofit unit on the market, one that is not restricted to one press only and a unit that can offer holographic varnish effects as well as inline cold foiling.

The cold foiling process uses the first two towers of a sheetfed press, the first applies a glue using a standard plate to carry the glue image to the sheet of paper, and the second unit presses foil against the paper which adheres to the glue and pulls away from the backing sheet. It can then be overprinted to create a wide range of metallic colours. It is a process that adds impact to packaging, to point of sale and other posters, to magazine covers and even to brochures and catalogues. Car images in particular reproduce well, hence the popularity of those at Drupa.

They were produced at Koch and Glasder, in Neuss, just across the Rhine from the Dusseldorf show ground and one of Compact Foilers’ key customers in Germany. The company was also running trips from the show to see the unit in action during Drupa, taking up to 25 interested printers on every visit. Koch and Glasder has collected a number of awards for the quality of its print work, so understands precisely where the foiling technology fits.

In an industry where declining margins in the face of stiff competition are the norm, inline cold foiling provides a way to differentiate a printer from his competition and so achieve a higher margin through producing high impact products.

The concept is not new, but has changed significantly since the days when it was considered a poor cousin to hot foiling. The design of the Compact Foilers CF1000 machine means there is no contact between roller and the foil surface above the press, so eliminating the major cause for the foil flaking. Foils too are much better than in the past with a broad selection of metal finishes to choose from. Silver offers the best scope for overprinting and achieving high impact results.

“The time is right for this new technology,” says Self. “Printers need to be looking for new ways to add value for their customers without having to spend much money. This device can go on any press and opens new avenues for cold foiling and special effects.” The CF1000 process starts with an unwind/rewind unit that feeds the foil, locked into a docking station at the side of the press. The foil passes through rollers and down into the press controlled through servo motors which match the speed of the foil to the speed of the press, meaning that the CF1000 will run at full press speed. The foil is then fed back to be rewound. Because the unwind and wind units are to the side of the press, there is no need for heavy lifting technology to bring the roll of foil into position above the press.

The second aspect to Compact Foilers is that its system can also deliver a cast and cure film, where the pattern is embossed into the varnish. “It comes out like a hologram,” says Self. “The packaging guys are going crazy for this. Some of our customers are running the cast and cure film up to ten times!” It is a reason why there were referrals from press manufacturers that might be able to offer a cold foiling system, but not the versatility of the combined system. The film can also carry special effects; holographic foils being particularly effective.

“We are also the only system that is portable between presses,” says Self. The CF1000 will fit to a docking station that can be fitted to any press, one machine for cold foiling, another for cast and cure perhaps, or in different positions on the same machine.

A further key aspect is that use of the foil is maximised, firstly by rewinding it and then by moving it slightly for subsequent passes to ensure full use of the foil. The unit will also run multiple narrow width foil reels. Each reel of cold foil can be handled up to three times in this way thanks to a servo registration on the foiler. This is possible even when running at full press speeds, up to 18,000sph. “Nobody else can do that,” says Self.